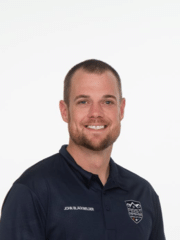 John Blackwelder is a Co-Founder of First Defense Insulation and serves the company as CEO. While attending school, he worked for his father at the family's dry-cleaning business learning the values of working hard, serving others, ethical business practices, and building meaningful relationships.

The first 15 years of his professional career, John served as a Law Enforcement Officer, Firefighter, and Paramedic. John earned a B.S. degree in Criminal Justice from Sam Houston State University.

After public service, John was recruited to work for one of the largest Spray Foam Insulation companies in the south. In four short years, he worked at every level of the business from installer, seven figure a year salesman, operations of his local branch, director of operations, to management of the company and all departments. John co-owns a trucking company with his brother and is an investor in other businesses.

John married his beautiful wife Amy in 2008 and they both share a love for animals. Their "children" include five dogs, three horses, two goats, a cat, and chickens. John is an adopted son of two loving parents and a twin brother. He enjoys experiencing new life adventures with Amy, spending time with his family and four-legged children, riding motorcycles, and being active in the community.

Back to Previous Page Back to Meet The Team

We serve the following areas